A professionally restored, Porsche 911 SC, will be the main attraction at the Jardine Motors Charity Ball in support of Whizz-Kidz, to be held at Porsche Centre Colchester on Friday 21st November. The car, over 32 years old and first registered in 1982, was restored by a team of 4 Porsche Technicians based at Jardine Motors owned Porsche Centre Cambridge.

The team of technicians, all classic car enthusiasts, worked on the restoration project for four months with over 600 service hours being devoted to the task. Initially, the car was dismantled with various parts and components removed, repaired and restored.

The engine was completely stripped down and treated with bead blasting to bring the sparkle back to alloy parts. The body work process began with any corrosion being treated, the front wings replaced and all parts prepared for paint. The paint process alone took over 100 hours with the body shell and panels going through a thorough process to ensure a factory standard finish. Finally, the car was put back together again with meticulous care and attention to ensure an authentic 1980’s appearance with original parts being restored and re-used wherever possible.

The restored car was entered into the Porsche GB 2013 Restoration Challenge to mark the 50th anniversary of the Porsche 911, winning an award and achieving a commendation from the judges.

Commenting on the restoration Mark Herbert, Chief Executive, Jardine Motors Group said ‘I am extremely proud of the commitment shown by the team at Cambridge Porsche and the quality of work they have completed on this classic car. I am confident that their efforts will be reflected in the money that we are able to raise for Whizz-Kidz when we auction this iconic 1980’s Porsche’.

Matt Wigginton, Head of Corporate Partnerships at Whizz-Kidz, said, ‘We are very excited about the Charity Ball that Jardine Motors Group are kindly hosting in aid of Whizz-Kidz. A lot of hard work has gone into renovating this beautiful 1980’s Porsche for auction, and into organising the Ball itself, and we hope that Jardine Motors Group customers and guests will bid generously on the night. All the funds raised will help us provide specialist mobility equipment for disabled children, setting them free to live their lives to the full and reach their true potential.’

The car will be auctioned live by BCA (British Car Auctions) at the Jardine Motors Group Charity Ball complete with a 12 month mechanical and parts warranty. All proceeds from the sale, together with other auction lots, will be donated to Whizz-Kidz, Jardine Motors Group’s charity partner. 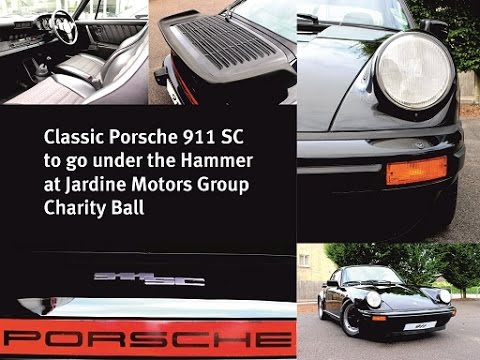 Used Cars In Your Area